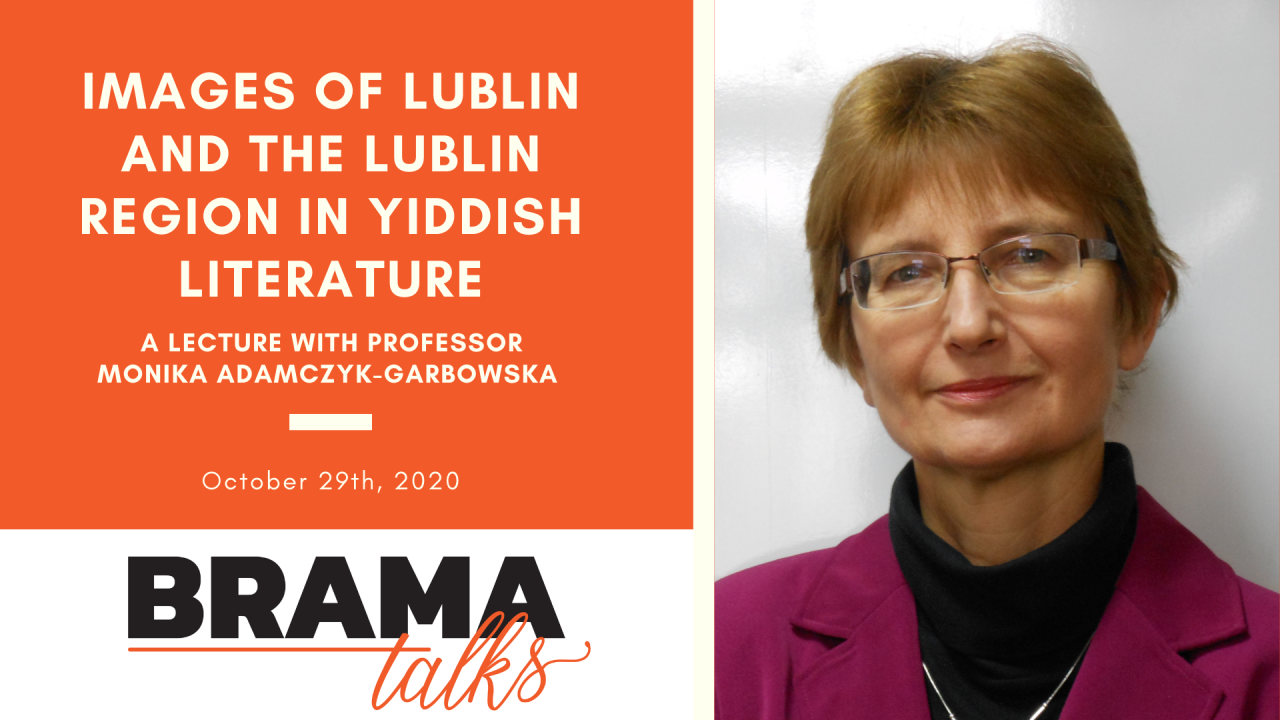 Please join us on Thursday, October 29, 2020, for the October edition of our monthly webinar series “Brama Talks.” We’re pleased to announce that professor Monika Adamczyk-Garbowska, an expert on comparative literature and Yiddish literature and culture, will speak on: “Images of Lublin and the Lublin Region in Yiddish Literature.”

Please note: This talk will take place an hour later than usual in the USA and Canada (3:00 Eastern time) but at the usual time in Poland and Israel (20:00 and 21:00 respectively) due to the fact that the clocks change one week later in the United States and Canada.

Please register through the following link: https://tiny.pl/7lsm2
Don’t hesitate to sign up, as the number of participants is limited.

For centuries Lublin constituted an important center in the life of Polish Jewry. No wonder the city frequently appears in Yiddish literature. Most contemporary readers associate it with stories and novels by Isaac Bashevis Singer. The city appears in several of his works: “The Magician of Lublin,” “Satan in Goray” and “The Last Demon.” It was here that Yentel, disguised as a boy in her thirst for knowledge, comes to study in a local yeshiva as some viewers might remember from the 1983 Barbra Streisand film.
In works by Bashevis Singer and other Yiddish writers, Lublin is presented as a real metropolis for Jewish visitors from the surrounding shtetlekh—little towns and villages. Though Singer was not born in Lublin, many readers associate him with the city.

Another outstanding Yiddish author, Yakov Glatstein was born here in 1896. He settled in New York at age eighteen, but came back for a visit in the late 1930s. That trip resulted in two autobiographical books. One of them, “Ven Yash iz geforn” (English edition: “Homeward Bound”), is largely devoted to reminiscences from his childhood and youth spent in Lublin. His strong ties with the city are displayed in the title of one of his last volumes of poetry “A Yid fun Lublin” (A Jew from Lublin).
Until the outbreak of World War II Lublin was presented as a relatively safe place closely connected with the vicissitudes of Polish Jews. During World War II and the Holocaust, the city which for a few centuries served as a haven for numerous Jews, became one of the most horrible sites of mass murder perpetrated by German Nazis. In 1941 the ghetto was established in the area of the Jewish quarter, and the Majdanek concentration and death camp was built on the outskirts of Lublin. Therefore soon after the war and for many years thereafter Lublin was perceived via the horrors of Majdanek.

Not only Lublin but the whole Lublin region is richly represented in Yiddish literature. Such prominent writers like Yitzkhok Leib Peretz or Sholem Asch place their works in towns and villages in the Lublin region or reminisce about them in their memoirs (e.g. Bashevis’s older brother Yisrael Yehoshua Singer). Bashevis Singer’s close friend and collaborator Aaron Zeitlin wrote one of the most moving poems about Majdanek.

Profesor Adamczyk-Garbowska will introduce the audience to selected Yiddish authors who wrote about Lublin, highlighting a variety of voices and perspectives. Pokaż mniej

Brama Talks: The New Jewish Cemetery in Lublin as a Site of Commemoration

Memories of Lublin and The War: A Conversation with Rose Lipszyc

Brama Talks: A Bittersweet Discovery and The Voice of the Silence Project