The basic construction material in the area of modern Poland was wood. The oldest wooden architecture in the Polish lands was produced in the development of Slavic strongholds. The most primitive form of housing (albeit used until the beginning of the twentieth century) seen in the Slavic lands were dugouts and semi‑dugouts. Here, too, wood was also used in the construction of roof coverings, most often in the sokha‑beam system. A pitched roof supported by sokhas (vertical forked posts) and a transom (a level beam supported by the sokhas) was erected over a clear span interior. This extremely old construction system survived in folk architecture until the early twentieth century.

Various construction techniques were developed depending on the quality of the wood. Materials were not limited to wood, but to everything that could be obtained from a tree: branches, phloem, roots, bark (e.g. birch bark as insulation material) and wood shavings. The main types of wood used in building construction were mainly coniferous: pine, spruce, fir and larch. Only a few elements of the building, such as the ground beams, were made of oak. Oak was also used in the construction of stud walls. Wooden walls were erected using several techniques and there were also buildings with mixed types of walls. The oldest construction types are the sokha‑and‑ transom, the post‑ and‑plank and the blockwork structure; the slightly later stud wall technique appears in several varieties, or the specific half‑ timbered technique. There exists a very rich nomenclature for wooden construction elements and methods used for their erection, which vary from region to region. In Polish wooden architecture, besides wooden materials, the following were also used: clays, straw in various forms, reeds, lime, stones, occasional bricks and agricultural materials such as chaff, chopped straw and hemp.

The greatest threat to the integrity and longevity of wooden buildings is posed by water damage. A basic rule of thumb was to separate wooden elements from the ground, and protecting them against rain. The art of traditional construction relies on skilled placement of building foundations. In sokha-based construction, the vertical elements were placed in the ground for support. In the stud wall technique, the easiest and cheapest method was to place the house foundations on stones located beneath the corners of the building. Another method was to have stone or brick foundations.

The preservation of wooden architecture and maintaining its value can be achieved through conservation, adaptation, renovation, reconstruction and renovation. All activity aiming to revitalise the degraded areas, strengthened additional social and economic efforts, give these objects an opportunity to continue to function in accordance with its local conditions, profiting communities.

In the history of Norwegian building tradition there are mainly two different techniques: a horizontal and a vertical one. The technique of lafting is the dominating one. Horizontal logs are inserted into each other lengthways and ingeniously cross‑jointed together. The stave constructions have roof‑ supporting vertical posts, (staver), and vertical boards are forming the outer wall. The stave churches are built in this technique. Their secular equals are the trestle frame buildings, which are only found in Western Norway. Most of them are free‑ standing buildings, for example barns and boat houses.

There still exist today 29 stave churches build using posts, dating back to the Middle Ages. 281 wooden houses were also preserved. All of these buildings were made from pine wood. In the mountainous areas and in the western part of Norway, pine has been the usual building material in the past and still remains today. Secondary use of elements from stave churches that have been torn down demonstrates that oak has also been used. From the late 16th century and onwards, spruce became more and more dominant as a building material in the coastal areas of eastern Norway. As for trestle frame buildings, deciduous wood has been used to some extent. The diagonal braces are very often made with birch, ash or elm wood even though pine was used in other building elements.

In the three‑room dwelling house, the main room, (stove), is fairly large compared with the section comprising the anteroom, (forstove), and the sleeping quarters (kove). This section is called the kovepart. The entrance is always through the anteroom to the main room. There was never a direct access to the kove through the anteroom. The two rooms were divided by a plank wall and kove was accessible only from the main room. The two inner doors were next to each other, on each side of the plank wall. The kove was a sleeping chamber. To create a larger accommodation a ceiling was put over the kovepart (a trev). Sleeping over the main room was not possible because of the open hearth (åre), situated in the middle of the room. The smoke would traverse through a hole in the roof (ljore), placed directly over the hearth.

In Norway the roof cover and outer walls of the stave churches have been always tarred. Most of the stave churches were built during the latter half of the 12th century. Secular wooden buildings have been tarred in a less extensive manner. Along the western coast of
Norway it rains a lot more than it does in the mountainous area of eastern Norway, which was the reason behind using tar on the outer surface of the logs and the outer planks in the trestle frame constructions. In the city of Bergen tarring was banned in 1572 because of serious fire hazard. In the years to come other cities followed suite. The ban may have influenced the farmers to use less tar, or stop using it altogether on their buildings even though it was not forbidden.

More information about Polish and Norwegian wooden architecture can be found in the following project publications: 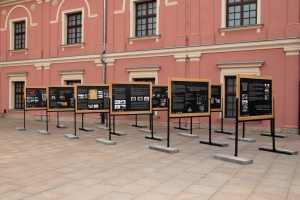 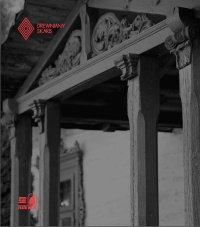