Getting to Know Tadeusz Przystojecki By Leora Tec

Many of you know Tadeusz Przystojecki—the young historian at Brama Grodzka who has helped many Lubliners find information about their families. We hope you enjoy this conversation with him.

Tadeusz, when and how did you first connect with Brama Grodzka?

Tadeusz: It was because of my grandfather. I did not really know what I wanted to do in my professional life. My grandfather was “an unfulfilled historian.” He loved history but never got to work as a historian. He had led a fascinating life and was a great storyteller and he really inspired me. Because of his work in local history he had a connection to Brama Grodzka. He was inspired and touched by the place and encouraged me to connect with it as well.

How did you start helping people with genealogical research?

Tadeusz: The truth is I didn’t set out to do this. The opportunity came to me. When I first came to Brama Grodzka I discovered a wealth of archival sources describing the non-existent town and its residents. Several people came to Brama Grodzka who were interested in roots trips to small towns in the region. Because of my archival expertise and my knowledge of English and Russian I was a logical person to help them.

Tadeusz: Yes, I spent almost a year in the States and my English improved. The Russian I got from my mother who is Russian. This is valuable in genealogical research in Lublin because often records we come across are in Russian. And of course English is necessary to speak to most of those looking for their roots.

And you have a private practice in genealogy as well, right?

Tadeusz: Yes, in 2011 I began working part-time at Brama Grodzka and part time in my own genealogy firm where I also employ others to help.

What’s the most important project you have worked on at Brama Grodzka during the last few years?

Tadeusz: Definitely the 43,000 Project, which aims to catalogue information about the Jews who lived in Lublin before the war. Lublin 43,000 is quite an ambitious project. We interconnect the four elements of memorialization: people, places, events and sources and—as Tomek Pietrasiewicz, the founder and director of Brama Grodzka says—we create stories from raw data.

It sounds like this project is making that raw data come alive. How do you achieve that?

Tadeusz: We are doing some things that are revolutionary in their approach to databases and cartography. One of them is HGIS Lublin, an advanced geospatial system that we developed from scratch. Using this technology people can explore, for example, a particular address where a relative lived, as well as get a wider perspective of the city from a given time period. Our database includes mainly information about Lublin and the Lublin region, but not only (e.g. Shtetl Routes project maps). Since 2019 we have added many maps.

Can you give me an example of some maps that you have created?

Tadeusz: There is a monumental map of Lublin in the late 1920s and 1930s that we are still developing (this is something that Lubliners will find very useful); a reconstruction of a map of Lublin from the year 1569 (the year when the Union of Lublin was concluded) and a map about Operation Reinhardt.

I also want to mention the Lublin-Antwerp project that I have been working on since 2016 with Jackie Schwarz.  A few hundred people from Lublin immigrated to Antwerp in the 1920s and 1930s and it’s amazing how many people have found connections to them.

I imagine that you find the work gratifying.

Tadeusz: Very much so. I can give you an example. Shelley Capozzi never knew the names of her mother’s siblings who had all perished in the Holocaust and I found them for her. It wasn’t difficult for me and it was really meaningful for her.

I am lucky that I knew all of my grandparents; I have a lot of family stories from both sides but for the descendants of Jewish Lublin it’s a different story. I am honored to play a part in the meaningful endeavor of connecting people to their roots.

Tadeusz, thanks so much for speaking with me and for all you have done for the memory of Jewish Lublin.

Tadeusz: Thank you for the opportunity.

Watch the interview with Tadeusz Przystojeci (courtesy of Neshoma Project)

The database of the "Grodzka Gate - NN Theatre" 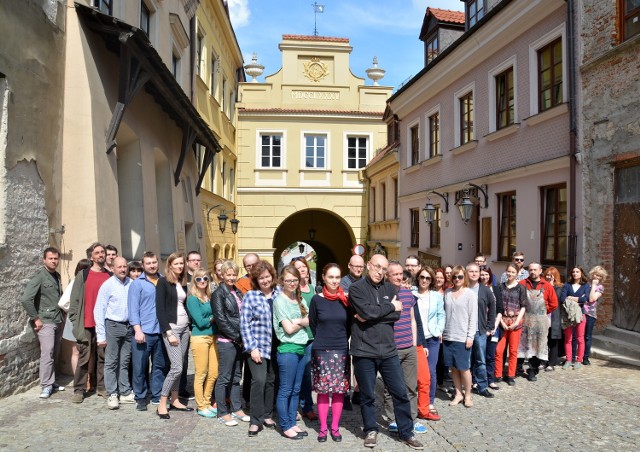