MY PARENTS – Story by Judith Maier

The family story of Judith Maier, born in Wałbrzych in 1946 as a daughter of Mania Małka (nee Akerman) and Pinkas Zyskind. She joined the Lubliner Reunion together with a group of Lublin Jewish Organisation's representatives. Her moving story depicts times of war and, the fates of her mother - a little girl who managed to escape from the transport to Bełżec and survived the horror into the ghetto on Majdan Tatarski and the story of her father, who was held in a labor camp at Lipowa Street. Judith's testimony has been also recorded during her previous visit at the Grodzka Gate in 2006.

On the 16 of March 1942 at night the first deportation to Bełżec began. The big action. My mother and Chil [przyp. red. Wajcman, Judith mother's first husband] join the family although they both had a working permits - J-Auswais. [...] They were led to the train station. Chil was stopping, being seek and not yet recovered of the typhus. The Ukrainian guards shoot everyone who felt. My grandfarher Hirsz felt that they could shoot his son in law. Ask them to jump under the bridge, they passed. And my mother did what her father ask her to.

The Lubliner Reunion, 'My parents' - family story by Judith Maier, 2017

My both parents have survived the war in Lublin. They have meet there [get married] and few years after the wedding they left Lublin to Wałbrzych, where I was born. 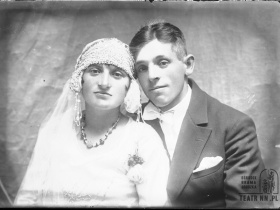