The well at the Lublin bus station

Suction lift  pumps with wooden pipes were being installed in wells in Lublin already since 1826, and in 1841 engineer of the province, Feliks Bieczyński began to endeavour to replace them with lift-and-force pumps with iron pipes. Count Andrzej Zamoyski’s Machines Factory in Warsaw, that by 1863 had installed three of such devices in municipal wells, accepted the commission. Pumps were meant to be equipped with flywheels and cranks.

After operation tests, the project was accepted for implementation: In the catholic city, where each of 8 wells is about 160 ft deep, suction lift pumps with flywheel and pump casing will be installed, whereas in the Jewish city, where all 4 wells are shallow - lift-and-force pumps are to be fitted.

Zamoyski’s factory also offered a standard design of the pump housing. In the city files from 1809-1874 period such design is kept, submitted by the factory in 1864, when the company was assembling the well on the market square, near the Świętoduska St. and Nowa St. (part of today’s Lubartowska St.) junction. Existence of a medieval gród (a wooden fortified settlement typical for Slavonic nations) named Lublin at the turn of the 12th century was proved, among others, by the discovery of remnants of the city’s former fortifications. It is not known precisely, since when had the wooden settlement been existing. It might have developed around a wooden watchtower, constructed on nowadays’ castle hill  - as tradition has it - already in the times of Bolesław I Chrobry’s reign. It is possible that a brick church was located within the 12th-century settlement. The church was consecrated in 1604. It is one of the first baroque buildings erected outside Italy. In the second half of the 18th century, after the Society of Jesus had been cassated, the church fell into disrepair. Restoration works were carried out in the first half of the 19th century. In 1823, the church was elevated to a cathedral. 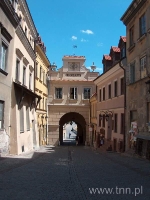 The Holy Trinity Chapel, adjacent to the Lublin Castle, is one of the finest examples of Medieval art in Poland. Its Gothic architecture, combined with Byzantine-Ruthenian polychromes, makes up a unique synthesis of Eastern and Western cultures.

Tower at the Lublin Castle The tower at the Lublin Castle, also referred to as the donjon, is the sole monument of the Romanesque architecture east of Vistula river. This cylindrical brick building is one of the elements of the Lublin Castle complex. Heading from Krakowskie Przedmieście Street towards the Old Town, one notices the silhouette of the Kraków Gate (Pol. Brama Krakowska) from far away. History of this brick building reaches back to the 14th century. After the minacious Tatar raid of 1341, it was decided that the city would be surrounded with fortified walls and gates. The Kraków Gate, which was named after the route and the suburb towards which it led, is one of those gates.

Basilica of St. Stanislaus and Dominican monastery in Lublin The Dominican church and the monastery were erected in the southern part of the Old Town Hill (wzgórze staromiejskie), on a small elevation, the so-called Dominican Hillock (górka dominikańska). The monastery’s history is related to the relics of The True Cross that were kept there until 1991.

Chapels at the basilica of St. Stanislaus in Lublin

History of the Dominican church and the monastery relates to the relics of the True Cross, kept there for several ages. According to Jan Długosz, they were brought to Lublin in 1333, while another account states that it happened after 1400. New chapels were being constructed at the church one after another in order to store the relics. Standing in the middle of the market square is the edifice of the Crown Tribunal, which replaced the wooden town hall that had burned down in 1389. It is certain that a brick building existed in this place already in the 15th century, as preserved documents regarding meetings of the City Council taking place there attest, among other evidence. Initially, the building performed function of the town hall, where all the judicial and administrative authority was concentrated. Since 1578 it was the seat of the Crown Tribunal - the highest judicial authority for the nobility of Lesser Poland province. Today it houses the Wedding Palace and - in its lowermost section - a tourist route - The Lublin Underground Route.

History of Zamkowy Square (Castle Square) is related to the Jewish settlement in Lublin. Until 1942, Szeroka Street ran across the site of today’s square. It was the main street of the Jewish Quarter that was nearly completely destroyed by Germans during the World War II. After the war, the authorities decided that a ceremonial square would be created at the site, together with monumental stairs leading to the Lublin Castle. The square, whose current name rose to popularity only in the 1820s, is a historic landmark, not only for Lublin, but for the entire country. Saxon Garden (Polish: Ogród Saski) in Lublin is a municipal park in Racławickie Avenue, created in 1837, in the English style, pursuant to the design by engineer Feliks Bieczyński. The name, first used in 1860, was a reference to Saxon Garden in Warsaw. The official decision to build a railway station was made in March 1875. First test trains departed already in mid-August 1887. History of the property at 56, Krakowskie Przedmieście St. The parish church of St. Michael the Archangel was built in Bronowice, a district of Lublin, in the years 1930-1938, to the project of well-known Warsaw architect Oskar Sosnowski. The parish church of St. Theresa was built in the district of Lublin called za cukrownią (‘past the sugar plant’) in the years 1936-1937. Constructed to the design of Lublin-based architect Jerzy Siennicki, it is the only half-timbered church in the Lublin region.